The history of Florence

Founded in the 59 a.C. like roman colony with the Florentia name, the city did not have a role of particular relief in the ancient age neither in that altomedievale, when capoluogo of the Tuscia (under bizantini, longobardi and franchi) was Lucca. To give them importance it was, in XI the century, the process of formation of the communal autonomies, than of it it accelerated the political evolution and economic making of one of the centers more it lives us of the region. Defeat from Siena to Montaperti in the 1260, victorious one on Arezzo to Campaldino in 1289, Florence soon assumed the commando of the coalition guelfa in Tuscany and, seppur torn from violent social contrasts insides, it emphasized expansion politics that lead it in 1406 to the conquest of Pisa and the outlet on the sea. 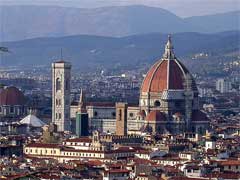 XV the century saw the city to rise to the role, that it maintained until to the first decades of the XVI, of guide indiscussa of the development of the civilization: a role anticipated from brilliant personalities which Dante and Giotto, and consecrated from a stuolo of architects, painters and scultori (from Filippo Brunelleschi to Leon Alberti Batiste and Michelozzo, from Masaccio to Paul Bird, Sandro Botticelli and Benozzo Gozzoli, from Donatello to Lorenzo Ghiberti, Luca of the Robbia and Michelangelo) much eminent not to have reply in no other city. But it was also, the XV, the century in which the communal orderings they had to leave the place the lordship of the Doctors that, in the 1500's, exceeds you the two tumultuous periods of restoration of republic (1494-1512 and 1527-1530), carried Florence to the annexation of the senese state in 1557 and, in 1569, to the rank of understood them of the Granducato of Tuscany. Extinguished in the 1737 medicea dynasty and passed the granducato one to the Lorena (she was then that Anna Luisa Maria, sister of last the Doctors, pattuì with the new one granduca that the great collections of art of Florence did not have to leave the city), to acquire special merits between the exponents of the new lineage were Peter Leopoldo (1765-1790), with an intense riformatrice action in economic, civil, cultural field. The last ones granduchi were Ferdinand III, which the conference of Vienna gave back in the 1815 power strappatogli from Napoleone, and Leopoldo II, than one great popular demonstration of fiorentini the 27 you open them 1859 forced to the abdication. Understood them of Italy from 1865 to 1870, the city was interested from an intense series of urbanistici participations (not always happy) which the 114,500 residents of the 1860 followed the expansions of the 1900's (were already go up themselves to 205.500 in 1901): the century of Florence protagonist of the dramatic events us of August 1944 (liberation of the city from the nazifasciste forces; you see Second gear world war) and of November 1966 when, in order to save its artistic and cultural treasures rovinosa alluvium of the Arno devasta you from one, prodigarono migliaia of young people (the so-called "angels of the mud") I noticed from every part of the world. Inhabitants (fiorentini): 374.501 (2001).